The Aboriginal Economic Participation Framework is designed to support Aboriginal employment and business opportunities through the awarding of government procurement and grants.

The new Framework has been developed through an extensive stakeholder engagement process, which began in 2018, and will replace the Indigenous Employment Provisional Sum policy which ceased in August 2017.

The Framework was developed using a co-design approach that involved considerable stakeholder consultation and participation with stakeholders from across the Territory. These included Traditional Owners, Aboriginal and non-Aboriginal businesses, Industry and Non-Government Organisations.

In November 2020, the Territory Economic Reconstruction Commission Final Report recommended the NT Government finalise and implement the Aboriginal Economic Participation Framework in order to promote increased Aboriginal participation in the Territory economy and  support enhanced social inclusion for all Territorians.

Two supplementary policies are also available to assist in supporting Aboriginal business and workforce growth, the Aboriginal Procurement Policy, and an Aboriginal Grants Policy, which will be released later this year. 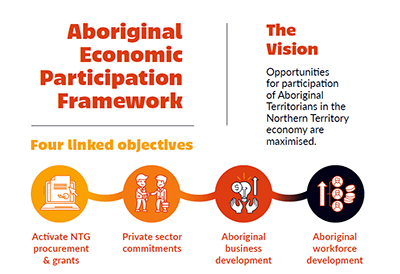